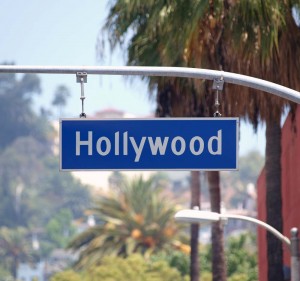 Hollywood is located in Los Angeles, California. Its claim to fame and cultural identity is the historical center of movie studios and movie stars. Much of the movie industry has dispersed into surrounding areas, important supporting industries, such as editing, effects, props, post-production, and lighting companies remain in Hollywood, as does the back lot of Paramount Pictures.

One of the most famous features of Hollywood is The Hollywood Walk of Fame.  It consists of more than 2,400 terrazzo and brass stars entrenched in the sidewalks along fifteen blocks of Hollywood Boulevard and carries over three blocks onto Vine Street. The stars are enduring public memorials to achievement in the entertainment industry, with a mix of actors, musicians, directors, producers, musical and theatrical groups, and fictional characters.  This is an extremely popular tourist destination with more than 10 million visitors

Grauman’s Chinese Theatre is a movie theater located on Hollywood Boulevard. It is housed on the historic Hollywood Walk of Fame.  The theater was built in 1926 and the theater opened May 18, 1927, with the premiere of Cecil B. DeMille’s film The King of Kings. It has been home to many premieres, including the 1977 launch of Star Wars. One of the theater’s most distinguishing features are the concrete blocks set in the courtyard. These blocks have the signatures, footprints, and handprints of popular motion picture personalities from the 1920s to the present day.

The Hollywood Sign is a landmark and American cultural icon. It is situated on Mount Lee in the Hollywood Hills. The sign overlooks Hollywood. The sign is spelled out in 45-foot-tall and 350-foot-long white letters. It was initially intended as an advertisement in 1923.It gained so much buzz and was  easily recognized as a piece of Americana that the sign was left up.  The sign was a frequent target of vandalism but has undergone restoration that includes a security system to deter vandalism. The sign is actually set on the slope of the hills so from the ground level it appears wavy, most photos or depictions are at the same level so the letters are thought to be straight across to most people.

Some of these places might seem a bit clichéd but they are such a standard for what Hollywood was all about that it would be a shame to miss them.  They are all American Icons of the film industry and a must see on your itinerary to the area.

Fun and adventure await you with Tradewinds Vacations, your partner in travel and vacation planning.