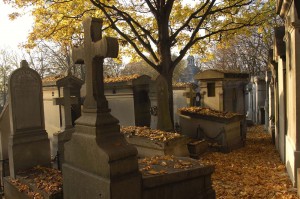 Père Lachaise is in the 20th arrondissement of Paris, and is reputed to be the world’s most visited cemetery, attracting hundreds of thousands of visitors annually to the graves of those who have enriched French life over the past 200 years. The cemetery is on Boulevard de Ménilmontant.

Cresting above a high hill overlooking Paris, this landmark cemetery is the final resting ground for some of the world’s most illustrious composers, poets and philosophers and artists including, Chopin, Proust, Balzac, Corot, Delacroix, Pissarro, Modigliani, Moliere, Oscar Wilde, Yves Montand and of course Jim Morrison.  Jim Morrison’s grave site had a bust that had to be removed due to vandalism, and the site is actually fenced off now and patrolled.

This is the world’s most visited cemetery, and is more of an outdoor museum than a place of mourning.  Parisians have long come to stroll and reflect through the winding cobbled streets, park benches, and street signs.  The 110 acre cemetery is a mini-city unto itself.  Many visitors leave flowers or notes scrawled on Metro tickets for their favorite celebrity residents.  The tombs are artistic works, decorated with exquisite marble and stone statuettes or chiseled around beautiful stained-glass windows.

Legends abound throughout.  The 18th century bronze tomb of murdered journalist Victor Noir is reputed to make women fertile when rubbed.  The polished sheen of certain parts of his tomb is a testament to the belief in this lore.  The tragic love story of Abelard and Heloise has faded through history, but in the 19th century their tombs were magnets for disappointed lovers.

Père Lachaise is still an operating cemetery and accepts new burials. However, the rules to be buried in a Paris cemetery are rather strict. People may be buried in one of these cemeteries only if they die in the French capital city or if they lived there.  There is a waiting list and very few plots are available. One million people have been buried here and along with the stored remains in the Aux Morts ossuary, the number of human remains exceeds 2–3 million in Père Lachaise cemetery.